FAIR data advanced use cases: from principles to practice

The purpose of this report is to share knowledge about the FAIR (Findable, Accessible, Interoperable, Reusable) data policy in the Netherlands. 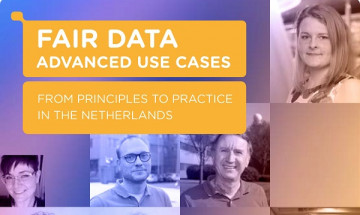 FAIR is a clear statement

The idea that data should be FAIR, or findable, accessible, interoperable and reusable, is a clear statement. This report uses 6 use cases to describe the following:

With this report, we want to build up expertise on the implementation of the FAIR data policy in the Netherlands. With the insights gained from this, we can provide better support to you, as a scientist, to make your data FAIR.

Various organisations and disciplines are now developing standards, tools and training courses based on their own interpretation of the FAIR principles. Some fields of science have already advanced very far, although they do not always do so using FAIR. Due to their traditions, other domains have not been set up to use large amounts of research data. As a result of this great diversity, there is currently no clear overview of the development of FAIR principles in the Netherlands in terms of implementation.

In the use cases, researchers and research supporters explain the extent to which they were already involved in research data management before the term FAIR was introduced:

We also discuss the future of FAIR in the use cases: what are the required resources (including long-term data storage) and where are the needs in terms of further elaboration and support?

The FAIR data principles were formulated during a workshop in Leiden, but have been adopted internationally. The international FAIR principles were published in 2016. The principles are guidelines aimed at making scientific data suitable for reuse under clearly defined conditions. By both humans and machines. They are deliberately declared as principles, and not standards.

Ask me your questions about fair data.
Telefoonnummer
+31 20 800 13 00
E-mail
melanie.imming@surfsara.nl