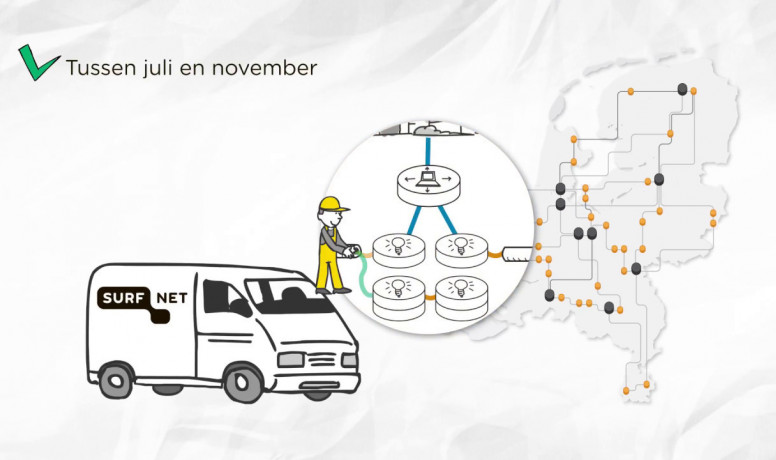 The optical layer illuminates the optical fibres. This layer forms the basis of the SURFnet network and delivers transport functionality to the service layer. With the new optical layer from ECI Telecom, 100 Gbit/s transport capacity will be the standard and 400 Gbit/s will be possible.

About the implementation process

We migrated the optical layer by branch - a chain of locations between 2 major hubs in the network. Taking a branch-based approach meant that the implementation process took a little longer but, that way, we avoided temporary interruptions to institutions' connections. When work was being carried out in a branch, there was a chance of loss of resilience in part of the network. The institutions have been informed about this well in advance. By working mainly during the day and migrating on a location-by-location basis, we reduced loss of resilience to a minimum. We were in control during the work. In the event of increased impact as a result of problems elsewhere in the network, the connections could have been recovered quickly and easily.

The engineers have been in training as preparation for the implementation process. On Friday, June 9th, we have deployed a 400 Gbit/s connection between Breda and Utrecht. With this link we have tested ECI’s Apollo platform on a new optical fibre that was not yet in use.  At the end of June we started installing the new equipment. At the moment, all of the equipment is installed.