Subscribe to the first-ever Dutch AWS DeepRacer Competition, organised by SURF, Amazon Web Services, Binx.io, and GoDataDriven. This will be your one-in-a-lifetime-opportunity to showcase your know-how of artificial intelligence and machine learning! 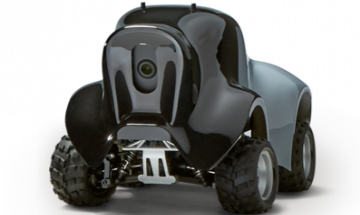 The competition starts end of may with the preliminary rounds. After three competition rounds, the finals will take place in June. The winning institution team is eligible to represent Dutch Research and Education in the rounds which precedes a potential placement in the finals taking place at AWS Re:Invent in Las Vegas (Dec. 2 - 6, 2019)

During the competition, three physical races are being held and two virtual races take place. The goal of the competition is to demonstrate the possibilities of Machine Learning and Cloud Technology to the members of SURF by offering the opportunity to play around with machine learning technology on AWS in a fun and encouraging, competitive, environment.

This unique competition became reality because of the collaboration between four organization with a clear focus on cloud technology and machine learning: SURF, Amazon Web Services, GoDataDriven, and Binx.io.

SURF mobilized its members to participate in the competition. On top of providing the cloud credits, AWS provided six AWS DeepRacers for the physical race events. Binx.io ensured the cloud components were ready and on-boarded the teams on AWS. GoDataDriven shared their knowledge about building, training and delivering ML workloads in general, and to the AWS DeepRacer in particular.

AWS DeepRacer is a 1/18th scale race car which gives you an interesting and fun way to get started with reinforcement learning (RL). RL is an advanced machine learning (ML) technique which takes a very different approach to training models than other machine learning methods. Its superpower is that it learns very complex behaviors without requiring any labeled training data, and can make short term decisions while optimizing for a longer-term goal.

With AWS DeepRacer, you now have a way to get hands-on with RL, experiment, and learn through autonomous driving. You can get started with the virtual car and tracks in the cloud-based 3D racing simulator, and for a real-world experience, you can deploy your trained models onto AWS DeepRacer and race your friends, or take part in the global AWS DeepRacer League. Developers, the race is on!

The competition consists of two Virtual Races and three Physical Races. The races take place every other week during office hours. The physical race events consist of an opening, free training, race event, and price ceremony (including a bottle of champagne for the winning team). Duration is approximately 1.5 - 2 hours.

Teams can consist of employees of SURF members (MBO, HBO, WO, UMC, research center part to the SURF corporation), supplemented by e.g. students and a team made up of SURF engineers. A team can consist of between 2 and 6 team members.

Each member can subscribe 1 team and there is a maximum of 6 teams for the competition.

During the first event, the team members will be introduced to the DeepRacer and its components, including the interface. The competition will be explained. Every team is assigned a mentor, who can support the teams during the competition. During this event, the team members also learn to use the DeepRacer (console, uploading models, Sagemaker, etc.) as well as reinforcement reward models.

General understanding of AWS is helpful, as well as experience with Sagemaker.

Python
It is important that participants have experience with Python. To brush up on the skills, participants might want to take a look at Datacamp.

Reinforcement Learning
As the Deep Racers are able to drive autonomously based on a reinforcement learning model, it helps if team members have some experience with RL and reward models. During the onboarding event, the participants are trained on RL.

During the competition, the teams have access to technical support. Before every physical race, a 60-minute online Q&A Session takes place, which is open to all teams. The objective of such a session is that the teams can ask questions and everyone in the competition has access to the answers and information shared.

During the race event, experts for cloud, Sagemaker, Python & RL Models are present and available to support the teams on a technical level.