In the Netherlands, Nikhef and SURFsara together form a Tier-1 site, which means that they receive data from the experiments run in CERN’s particle accelerator, the Large Hadron Collider (LHC) in Geneva. Nikhef Director and physics PhD Frank Linde talks about the WLCG and working with SURFsara. 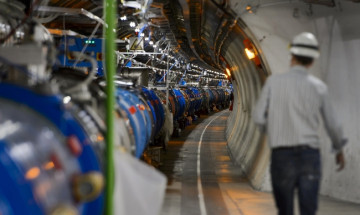 SURFsara and Nikhef began collaborating long-term in 2004. Together they cater for the storage, analysis and archiving of ten per cent of the data generated by the LHC. The Worldwide LHC Computing Grid (WLCG) project dovetails the activities of all Tier-1 centers. Frank Linde: “This is a real win for the Netherlands. We’re not one of the ten biggest countries in the world who work with CERN, and yet we are one of the Tier-1 sites.”

It is not only for the prestige that Nikhef is a part of the WLCG. The collaboration has a long history: since 1993 Frank Linde has been involved in the Dutch experiments run on the CERN accelerator using the ATLAS detector, an enormous detector whose purpose is to detect the Higgs boson. Linde: “The Higgs has been predicted, but never experimentally observed. The Higgs boson is crucial to understanding the phenomenon of mass.”

From www to WLCG

The WLCG is a special project. Linde: “CERN is where the World Wide Web (www) was developed, which made information easily accessible. But the WLCG goes one step further, making processing power and data storage capacity available. So it is actually the next logical step of the web. The purpose of the WLCG is to make computing power and data storage available everywhere.”

The hardware at Nikhef and SURFsara is funded by the Dutch BiG Grid project, and money is required in order to continue conducting the Tier-1 research. That is why we put together this proposal jointly with the NBIC and NCF. Linde: “My research was part of that proposal. But there are more fields of science involved. In order to continue to finance the system, Nikhef is looking for applications in other areas. For example, at BiG Grid we are currently looking into the possible applications of grid computing in the humanities. We help these other academic fields to make use of the computing and storage facilities.”

"Our executives are both SURFsara people and Nikhef people. Together, they develop computer tools. The way in which we have set up the BiG Grid organization preserves an excellent balance between the number of people from SURFsara and Nikhef."

Lots of bits and bytes

Tier 1 in the Netherlands consists of around 4 petabytes (4 billion gigabytes) of disk space, 1 petabyte of which is managed by Nikhef, the other three by SURFsara. SURFsara provides the entire 2 petabytes of tape storage, and the 3,500 cores of processing power is halved between SURFsara and Nikhef.

Linde is positive about working with SURFsara: “Our executives are both SURFsara people and Nikhef people. Together, they develop computer tools. The way in which we have set up the BiG Grid organization preserves an excellent balance between the number of people from SURFsara and Nikhef.” Also, the uppermost Tier-1 representative at CERN is from SURFsara, not Nikhef: “They do an amazing job: they are experts in computing. It’s not for nothing that SURFsara is the best HPC center in the country!"