You can see straight away what they are about in a display at their offices in Delft: plastic waste from the Pacific Ocean. This is the material that The Ocean Cleanup want to clean up. To do so, the organisation has developed enormous V-shaped barriers, which float on and below the surface of the water and act as a trap to collect all of the plastic that is sent towards it by the currents.

Now more 50 fifty people work at The Ocean Cleanup, 5 of whom focus on the development of computer models for the barriers. What is the best way to trap the various types of plastic particles? Of course, they need to continue to float into the barrier towards the capture point, while the water – and the sea life – meanwhile flows underneath. How high do the barriers have to be, then, and where do they need to be anchored? 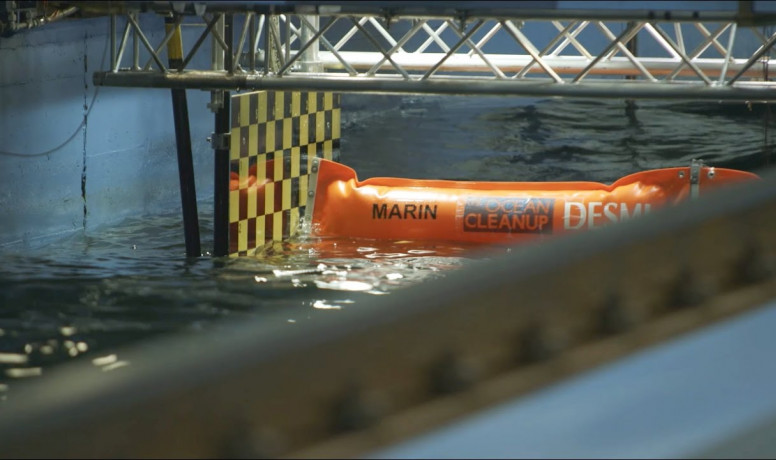 The head of this modelling team is Bruno Sainte-Rose. He explains that the modelling starts with testing: "In the laboratory – in this case the concept basin at MARIN in Wageningen – we can measure everything and monitor it accurately. We reproduce our findings in our model. We vary the parameters, such as the speed of the current and the size of the particles, and ensure that the model properly reflects the effects of that. Then we can use the model to forecast the real behaviour of the ocean, as everything there is 5 times as large as in the lab.

Bénédicte Dommergues, modelling engineer, adds: "If our developers now want to change something in the barriers, they come to us to ask what the effects of that will be. We now have a good handle on the effects of the currents. Currently we are working on capturing the effects of waves in the model."

This all sounds much easier than it is. Sainte-Rose: "We have to deal with turbulent currents: through the barrier, but also through the air above it. Also, the barrier is not fixed: it moves in several directions. That means that you have to perform complex calculations in three dimensions." As a result of all of this, the model is so complex that a normal PC would have to work for 3 days continuously at maximum power: inconvenient, if you only want to take into account a small adjustment.

The Ocean Cleanup was therefore very happy when SURF agreed to provide access to the Cartesius supercomputer. Dommergues: "Now I can run several versions of a simulation alongside each other in less time. Or I can change something, let it run for a few minutes – instead of a few hours – and I know whether it works. The supercomputer accelerates the development process enormously. We not only have access to processor time and storage space, SURF also provides the support we need. They help us with installing software, and if a new version becomes available, they install it straight away."

Despite everything, models still have their limitations. Dommergues: “You always have to strike a balance between realism and computing time. In the model, for example, we assume barriers made from rigid material, instead of flexible material, as is actually used." Sainte-Rose: "Calculations with flexible material would require much more precise measurements in the pool, using a laser setup. Then everything would have been three times as expensive and we would not have had any more time or money for making enough variations in the current and the plastic particles."

For all that, The Ocean Cleanup has set a new standard for accuracy in maritime design. Sainte-Rose: "I would not say that we are performing the heaviest calculations in the world, but it is much more than for normal offshore operations. As an expert in computer modelling for oil and gas companies, I have worked for a number of years in the sector and they did not have this sort of hardware available. It is, therefore, something really special that we are able to use the supercomputer. We are entirely dependent on donations and help from organisations such as SURF. Only with their help can we reach our goal: cleaning up the oceans."

About The Ocean Cleanup

Large areas of the ocean have now turned into a "plastic soup". This is made up of all sorts of material: from broken drift nets and bottles, through to tooth brushes and bags. Capturing and removing these end products from our environment is the challenge that The Ocean Cleanup has taken on. This non-profit organisation was founded in 2013 by the Delft student Boyan Slat in order to make his idea a reality: floating barrier that capture and collect the waste. At the end of this year, the first test barrier will be put to sea.