The University of Amsterdam (UvA) and Air France-KLM have 100 Gbit/s connectivity at their disposal, for research into, among other things, aircraft maintenance. Via NetherLight, SURF’s European hub for international light paths, a connection can be established for research purposes to, for example, StarLight in Chicago. 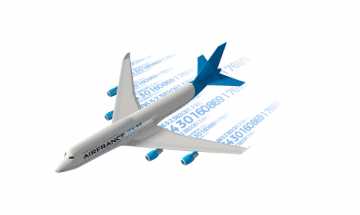 Besides people and luggage, aircrafts transport data they generate, like flight information, technical statistics and sensor readings. These data tell pilots and engineers if the aircraft’s critical systems are doing their job safely. When data are transferred and analyzed rapidly, defects can be solved more quickly, possibly even while the aircraft is waiting at the gate. When receiving the data within minutes, engineers in a remote airport can rapidly verify with the home base expert engineers if an engine vibration warning was caused by the engine or by a failing sensor.

<p>The UvA and Air France-KLM use 100 Gbit/s connectivity for research into remote maintenance. Using light paths, you can transport huge amounts of data at high speed and with a guaranteed bandwidth between 2 points. When using high volumes of data, the current Air France–KLM’s Internet connections are not private or fast enough to transfer the data within the requested time frame. Transferring a terabyte of engine data via the current Internet connections would take around 30 hours; with a 100 Gbit/s light path this takes less than 2 minutes.</p>

<p>Ciena and SURF facilitate the connection from Air France–KLM to NetherLight, SURF’s European hub for international light paths, in Amsterdam. SURF provides the 100 Gbit/s light path, which is reserved for research purposes only, from Air France-KLM via NetherLight to the research site. Ciena is the hardware supplier.</p>

<p>In addition to the aircraft research, high bandwidth, low latency light paths offer possibilities for research in other industries as well. For example, fundamental research on data transfer protocols suitable for these bandwidths can also help excel diagnosis by doctors when they can have access to terabytes of patient and other related research data within minutes, instead of days or weeks. Imagine what this would enable other research disciplines to do too. Possibilities are almost infinite!</p>